US and German Highways: What is Reasonable and Prudent? 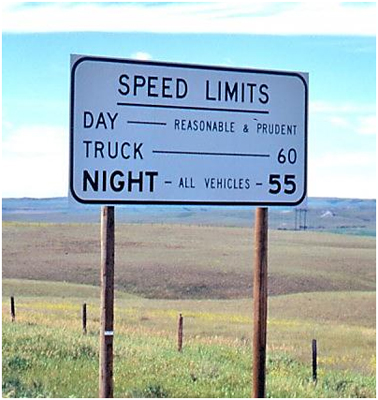 From 1995 to 1999 Montana lacked a maximum speed limit, advising drivers to travel at a “reasonable and prudent” speed during the daytime.
The U.S. Interstate System
Since the beginning of the 20th century, personal vehicles have given individuals the chance to travel across the United States. The Model T, an early affordable car, had a top speed of 45mph. Still, People traveling across the country found themselves on unpaved roads better suited to travel by horses. The ensuing decades saw changes in the quality of both cars and roads, making speed limits and law enforcement necessary for vehicular travel.
Dwight D. Eisenhower was the driving force behind the largest road endeavor ever attempted. At a shocking 47,182 miles, the United States Interstate Highway System1 is the largest network of roads in the world and one of the largest-scale public projects ever attempted. Speed limits on these highways vary from 35mph in heavily urban areas of New York to 80mph in certain parts of Texas and Utah2. Despite this variation, speed limits have seen many changes since the Interstate first opened in 1956. This includes a nationally imposed maximum speed limit of 55mph that was repealed in 1995 to the introduction of Montana’s “Reasonable and Prudent” speed limit3 , which bears a striking similarity to the speed laws of Germany’s Autobahn4 , the inspiration of the US Interstate. 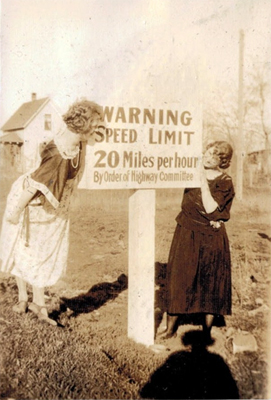 A pre-standardized Highway Speed Limit sign from the 1930s. Size, shape, text, and color must now be uniform on all US Highways.
The Autobahn
The Autobahn, which first opened in 1935, is Germany’s national road system. It was the first large-scale highway system ever successfully attempted and bears the distinction of having no mandated speed laws for cars or motorcycles on its roads. While commercial vehicles and trucks are restricted in speed, their maximum speeds far exceed the United States national average. Signs on the Autobahn propose a suggested speed of 130km/h or 81mph, higher than the fastest maximum speed limit in the US. 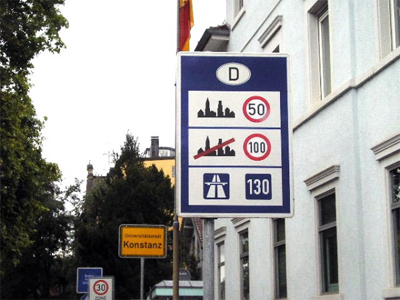 A speed limit sign in Germany showing that urban driving is a 50km/h limit, rural is a 100km/h limit, and the Autobahn has a suggested speed of 130km/h.
Accident Statistics in the United States and Germany
While the US often attributes high speed to many fatalities and accidents on the roads, the 2011 Road Safety Annual Report5 tells a different story. The number of road fatalities in Germany in 2010 amounted to 3,648 – compared to a striking 32,885 in the United States. This huge disparity has many contributory causes, including culturally accepted standards of driver behavior.

32 states mandate seatbelts for all passengers, but only 84% of drivers and 74% of passengers obey this law.
Germany has had a compulsory seat belt law in effect since 1976 for drivers and passengers in the front seat. In 1984 the law was extended to included passengers in the back seat. The 2010-2011 data find that 98% of drivers and 97% of passengers wear their seatbelts in Germany. In the United States, however, seatbelt laws are regulated by state, and mandated for drivers and front-seat passengers by only 32 statesvary by state in the United States, with only 32 states mandating seatbelts for drivers and front seat passengers. The International Road Traffic and Accident Database (IRTAD) found that only 84% drivers and front-seat passengers wore seatbelts, with an even smaller 74% wearing seatbelts in the backseat. It’s this kind of careless sentiment that draws the distinction between European and American drivers. While German drivers are known for dutifully following road rules and safety regulations, Americans are much more lax with traffic laws despite facing much higher penalties than European drivers. This lack of respect for road laws creates a terrifying environment for new or cautious drivers and a truly dangerous environment for all drivers. In fact, the IRTAD finds 10.6 Americans for every 100,000 died in 2010 due to car accidents, as compared to 4.5 deaths for every 100,000 Germans. Statistics like these highlight the importance of respecting road laws, limits, and buckling up. In the United States, an estimated 70% of residents are licensed drivers6 . In Germany that number is as high as 77.5%7 . These numbers get only more surprising with the considerable difference in obtaining a driver’s license between the two countries.
Licensing Drivers
In the US potential drivers must take a simple written exam highlighting the importance of signs, and take a short practical exam displaying simple skills like turning and stopping. In Germany, a license costs over $2000, and requires 25 to 45 practical driving hours as well as 12 hours of theory under professional instruction8. With these strict and steadfast laws, the lack of a speed limit seems negligible, especially considering the disproportionate rate of fatalities.
The question remains whether speed limits are useful in preventing fatalities. In 1973, then-president Richard Nixon signed a bill in response to an oil crisis that lowered the maximum speed limit to 55 mph9. Its main purpose was to lower overall consumption of gasoline, but following the crisis, the laws remained in effect under the assumption that they were safer. It wasn’t until 1995 that the laws were fully repealed. Although initially there was a decrease in the number of accidents on the road, the rate did not remain significant and the imposed speed limit did not greatly affect road accidents.

In 1973, President Nixon enacted a national maximum speed limit of 55mph in hopes that it would lower gas consumption. The law was fully repealed in 1995.
While it is inconclusive whether speed limits decrease the amount of road fatalities, it is clear that following signs, which advise or enforce a speed, can be preventative of major accidents. Maintaining a minimum speed in appropriate traffic and being mindful of driving conditions can avoid unnecessary accidents. Following seatbelt laws and not practicing distracted driving will also avoid unnecessary accidents. It is always more important to arrive safely as opposed to quickly, but by following the rules of the road, it is possible to do both.
1 Wikipedia contributors, "Interstate Highway System," Wikipedia, The Free Encyclopedia, http://en.wikipedia.org/w/index.php?title=Interstate_Highway_System&oldid=495022817 (accessed May 30, 2012).
2 Wikipedia contributors, , "Speed limits in the United States," Wikipedia, The Free Encyclopedia, http://en.wikipedia.org/w/index.php?title=Speed_limits_in_the_United_States&oldid=495020411 (accessed May 30, 2012).
3 Ballard, Mike. US Highways, "Montana Highways."Last modified October 17, 2006.Accessed May 30, 2012. http://www.us-highways.com/montana/mtspeed.htm.
4 Wikipedia contributors, "German autobahns," Wikipedia, The Free Encyclopedia, http://en.wikipedia.org/w/index.php?title=German_autobahns&oldid=494579742 (accessed May 30, 2012).
5 "Road Safety Annual Report 2011. "International Traffic Safety Data and Analysis Group.(2011). http://www.internationaltransportforum.org/irtadpublic/pdf/11IrtadReport.pdf (accessed May 30, 2012).
6 U.S. Department of Transportation, ."Highway Statistics 2003." Federal Highway Administration. . http://www.statemaster.com/graph/trn_lic_dri_tot_num_percap-drivers-total-number-per-capita
7 Sweedletr, Barry M. "Fit to Drive." 2nd International Traffic Expert Congress.(2007). http://www.fit-to-drive.com/2007/downloads/13_140607-Nachmittags-Sweedler.pdf (accessed May 30, 2012).
8 Flippo, Hyde. The German Way & More, "Driving in Germany."Last modified 2012.Accessed May 30, 2012. http://www.german-way.com/driving.html.
9 Wikipedia contributors, "National Maximum Speed Law," Wikipedia, The Free Encyclopedia, http://en.wikipedia.org/w/index.php?title=National_Maximum_Speed_Law&oldid=493598845 (accessed May 30, 2012).
© 2021, RoadTrafficSigns.com